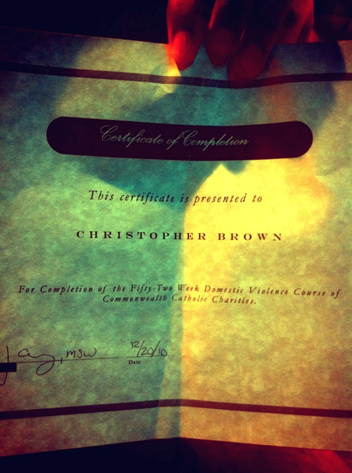 Chris Brown this week completed his court ordered 52-week domestic violence course and for his efforts he showed off a certificate of completion.

It has been almost two years since Brown was arrested and charged with domestic violence against then girlfriend Rhianna and he took to Twitter to say:

While the self congratulatory Tweet with certificate photo proof might be a little overboard, at least he’s been trying to get his life back in order, including a glowing probation report early this month.

Brown has also been nominated for three Grammy’s including a nod for Best Contemporary R&B Album for his work on Graffiti.

Brown is on a five year probation at the moment and 180 days of community labor.

I want a 52-week lifetime certificate for NOT hitting women.