.
You are here: Home / Quote of the Day / Celebrific Quotes: Clay Aiken on Clay Aiken 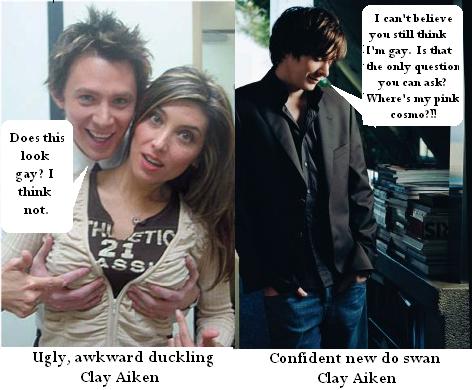 Clay Aiken is the ugly, awkward ducking turned into the more confident, new do swan. Clay has a new look, a new attitude, and by golly a new damn hairdo. So respect the boy, I mean man.

Aiken’s new album “A Thousand Different Ways” hit stores yesterday and by all accounts, the Clay fans are singing his praises. In a recent interview with People magazine, Clay revealed a little bit more about the new hairdo swan he has become.

On His New Do:

“I’m becoming a man, not just with my hair, but with my life. This year’s been an education: the education of Clay.”

On His Reported Gayness:

“What do you say (to that question)? â€¦ It’s like when I was 8. I remember something would get broken in the house, and Mom and Dad would call me in and say, ‘Did you do this?’ Well, it didn’t matter what I said. The only thing they would believe was yes. â€¦ People are going to believe what they want.”

That’s the best avoider answer I believe I’ve ever heard, he’s a master of the art.

On Panic Attacks He Suffered After American Idol:

“I’d walk into a room and say to myself, ‘I am not going to have a problem when these people stare at me.’ â€¦ But then (in) that situation, my heart would start pumping, and I’d start sweating and looking around nervously and shaking. I felt like I was going to have a heart attack.”

“I said (to my doctor), ‘Listen, I don’t want to go to a therapist. I have nothing against therapists. I want to think I can do this on my own.’ And she recommended that I try a medication. â€¦ Now I can sit here; I can go into a store; I can handle a photo shoot. I’m able to get rid of all that stuff in the periphery. It makes everything easier.”

“I want to be a father so badly. I want (kids) one day. Not now. â€¦ I would love to adopt. There’s an orphanage not too far from my house, and I’ve been up before with church. I always thought, ‘What happens to those kids who have the potential to go to college but just can’t afford it?’ I’ve been thinking a lot lately about finding a way to pay for one of those kids to go to college.”