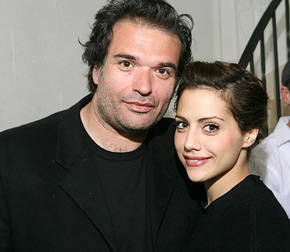 Us Weekly is reporting that cutiepants Brittany Murphy has recently married scruffy screenwriter Simon Monjack.Â  What the hell?Â  How did that one slip by so easily, I wonder?Â

29-year-old Murphy was seen partying with Monjack at the Kentucky Derby Saturday, where they were both sporting wedding rings.

An insider reveals, â€œ[Murphy and Montjack] were drinking Crown Royal, and [they] didnâ€™t want photographers to take pictures of their rings because they were waiting to make a formal announcement on Monday.â€

The insider goes on to say that, â€œThey were dancing in the V.I.P. section and around DJ Reachâ€™s booth. They looked very excited, happy and jovial.â€

This is the very first marriage for Britt, who was engaged not just eight months ago to another fella & also dated Ashton Kutcher.

Murphy’s rep did notÂ comment,Â Â no big surprise there.