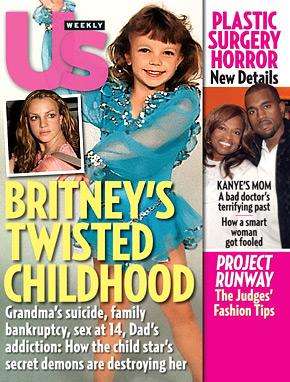 Aaaah, now we get her. Us Weekly magazine revealed a disturbing picture of Britney Spears’ childhood, told by her former lawyer Eric Ervin. Apparently, the “wholesome” image portrayed at the peak of her career was pure PR. (No surprise there.) Not only did she lose her virginity at 14 years old, but Justin got a piece of the action from the start.

But Britney didn’t exactly have any strong role models — or a stable family structure. Her grandmother, Emma Jean Spears, commited suicide by shooting herself at the grave of her infant son, who had died nearly a decade earlier. Her other children, including Britney’s Dad Jamie, were in elementary school. (His brothers eventually became homeless.)

The story actually helps the public understand why Britney’s so screwed up. Somebody help her. And (for once) we mean that in the nicest possible way.