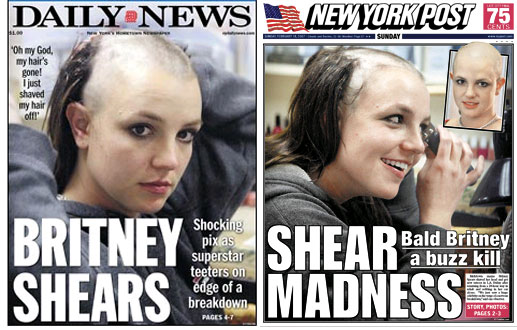 Over the weekend, Britney Spears was a busy gal.Â Â Spears checked intoÂ Eric Clapton’s Tears in Heaven rehab center in Antigua Friday & we all heaved a great sigh, thinking our lost little pop star was on the road to recovery.

But Spears surprised us all once again, as she unexpectedly took off from the rehab center shortly after homeroom & flew commercial, that’s right, commercial class to Los Angeles.Â  Once off the plane, nuttypants Spears did a walk-in at a shabby beauty salon where she, with some help, shaved her head bald.Â  Did you know that you can buy Spears’ locks on eBay now?Â

But that wasn’t the end of Brit’s crazy night.Â  Spears then walked her way to a tattoo parlor, frightening the locals with her crazytalk rants (see video here) & got at least one tattoo that we know of- some lips on her wrist.

Not since Mariah Carey’s meltdown in the mall have we seen this type of crazed behavior in a celebrity.