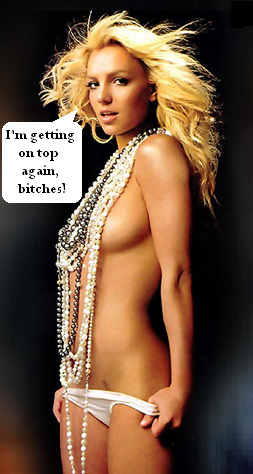 So, we’ve all thought for a good while now that the best thing for Britney Spears would be to get the hell out of Kevin Federline land.Â  And it looks like Brit has finally come around to our side of thinking, but why now?Â  What happened to the pop star for her to make this step now?Â  Why has Britney Spears just now filed for divorce from hubby Kevin Federline?

Well, according to friends close to Spears & K-Fed, the two had a big blowout last week that may have pushed the marriage over the cliff & beyond, leaving it a battered, old thing with barely a heartbeat.Â  Did I go overboard there?

Reportedly at a party for Kevin’s new worldly terror, or as other people seem to like to call it, his new album release, Brit & Federline got into it.Â  On October 31 in LA at club Xenii while K-Fed was working the crowd, Britney was upstairs, hidden in a dressing room.

Before the Halloween night was over, the black minidress-wearing Spears made a dramatic exit.Â  According to once source at the scene,Â “She ran down the stairs crying and stormed out.Â  Her eyes were swollen and her eyeliner was smudged. She looked like a complete mess.”Â  Did Kevin try running after his upset wife?Â  Did dutiful husband run after his love?Â  Why, no he did not.Â  Surprised?Â  Probably not.

Still matters were made worse when Britney started crying in public on November 2 while was dining with a friend at Library.Â  An onlooker revealed,Â “She cried on and off the whole meal.”
Â
So, there we have it.Â  The days leading up to Britney making the best decision this year.Â  Britney, we’re behind you 100% and we are so, so, so happy that you’re back on the sane side of things.