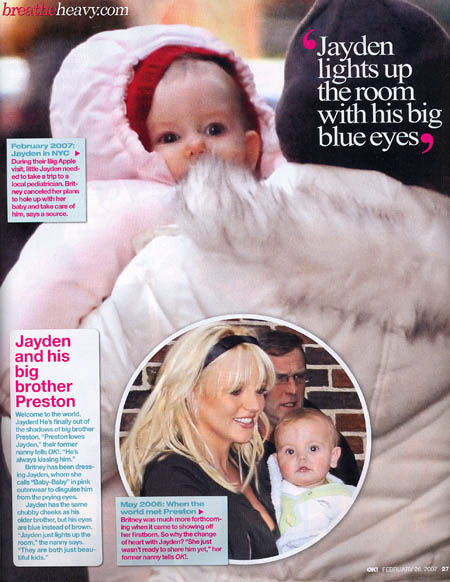 Thanks to Celebitchy we have theÂ reason why Britney Spears recently wentÂ bikini stripper crazy. Apparently good ole Brit had her heart in the right place, even though it’s about ten timesÂ too small.

Spears decided thatÂ she wanted to spend some time alone with her two children, 17-month-old Sean Preston & 5-month-old JaydenÂ James.Â Â BritneyÂ checked into the Four Season HotelÂ in Miami on MondayÂ only yo realize that she doesn’t actually enjoy being alone with her two tots.Â  Here’s the scoop.

“Usmagazine.com has learned that Spears, 25, checked into the Four Seasons Hotel in Miami around midnight on Monday with her boys, 17-month-old Sean Preston and 5-month-old Jayden James.

â€œThe hotel was full so we put Britney and the children in a two bedroom condo hotel room, which is very residential and like a big city apartment,â€ a hotel source tells Us.

According to the source, Britney and her boys made the trip solo – minus even a nanny. â€œBritney called the concierge desk, saying she was not able to shop herself because she had no one to watch the kids, so would a female please go out and buy her a bright-colored bikini,â€ says the source. â€œBritney was totally wishing she had help to take care of those kids.â€

By Wednesday night, the source says, Spears was feeling so overwhelmed by the kids that even though she had planned originally to stay a week she decided to fly back to Los Angeles on Valentineâ€™s night. â€œSomething happened,â€ explains the source.”

Wow, not onlyÂ does Britney Spears have the youngest & most simple brain inÂ Hollywood, she also hasÂ the smallest tolerance & appreciation for her children.Â  It’s a wonder she hasn’t put them up for adoption yet or given them to estranged husband Kevin Federline.

You tell me- Will Britney Spears ever grow up?