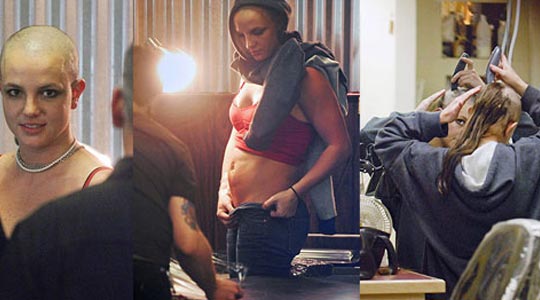 Britney Spears has taken rehab into round two.Â  Hooray!Â  Spears decided that it was best to check herself back intoÂ a rehab facility on Tuesday.Â

“We ask that the media respect her privacy as well as those of her family and friends at this time.”

Yeah, so let’s see how long Brit can stay this time.Â  More than 30 minutes?Â  An hour?

The decision for Brit to re-enter rehab comes after her weekend meltdown that consisted of her shaving her head on Friday night at Esther’s Haircutting Studio as well as popping into Sherman Oaks’ Body & Soul TattooÂ shop where she got aÂ cross on her hip & lips on her wrist.Â  Wonder if Spears will be checking into a cosmetic surgeon after she comes to her damn senses to get that ink removed….

Apparently Brit’s mom Lynne Spears has been very concerned about her daughter since the breakup with Kevin Federline, who wouldn’t be worried?

An insider reveals that Lynne was in turmoil over Spears’ recent behavior, “Her mom cries and begs Britney to calm down, but Britney just yells at her and tells her to mind her own business.”

“Lynne was at a breaking point.”

Over dinner Sunday at Stevie’s Creole Cafe in Encino, Spears’ daddy Jamie begged his daughter to enter treatment, Britney was donning that terrible blonde wig at the time.

“Jamie just told Britney how much he loves her and that he wants her to get help,” the source goes on to say.

“He told her that he’s afraid for her safety and that she needs to take a look at her life and make some major changes or everything is going to get worse. Britney listened to her father and nodded, but was very serious.”

After a long talk, Spears & her dad walked out of the restaurant together around 5pm.

The insider also says that the recent death of Brit’s aunt, Sandra Covington, may have been one straw too many for the Louisiana native, “She was already in a bad place and to lose a favorite family member compounded all the other tragedies and difficulties in her life — it only added to her downward spiral.”

Well, dammit, let’s all freeking hope that Britney crazypants Spears can stay in rehab for longer than a day this time.Â  At least she is where she needs to be to get some much needed help.Â  I can’t wait for the coming-out-of-rehab party.Â  I feel like Brit could actually make a decent album after all this crap, given that her head is on right.

What do you think- Will Britney Spears come out of rehab a sight for sore eyes?