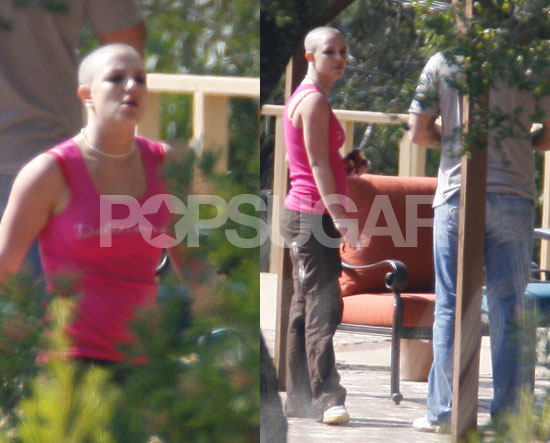 Thanks to PopSugar, we now have the latest pictures of Britney Spears in rehab.Â  As we reported earlier, Brit’s dad Jamie Spears had a long talk with his daughter Sunday at Stevie’s Creole Cafe in Encino, CA & it looks like the serious talk has paid off.

25-year-old Spears entered Promises Treatment Center in Malibu Tuesday after her father dropped her off at the posh facility.Â  Brit is not alone in choosing Promises, as celebs the likes ofÂ Ben Affleck, Matthew Perry & Mel Gibson have all sought treatment at the rehab center.

Maybe this new bald look will get Britney moving in a punk rock music kind of way, though I doubt it.Â  According to Extra TV, Brit’s new buzz may be thanks for estranged husband Kevin Federline who reportedly said he was going to test Spears’ hair so he could see what kind of partying she was actually getting into.

Maybe this willÂ be the last straw for Britney, maybe she’llÂ even come out of Promises looking a little less butch & a little less crazy.Â  We’ll just have to see.

What do you think- Is Britney Spears going to change her crazypants ways?