.
You are here: Home / Celebrities / Britney Spears Album Dropping March 2011, Plus She Calls Out “Haters” 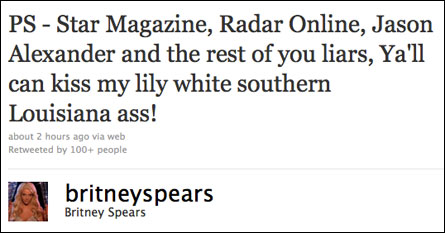 Britney Spears is dropping her new album in March 2011, having announced the albums drop month via Twitter on Thursday.

“I’m almost done with my new album and it will be coming out this March” adding “I AM IN L-O-V-E WITH IT!”

After announcing her album, Spears went after RadarOnline for claiming she suffered battery at the hands of Jason Trawick, her recent boyfriend and the same guy who is reportedly responsible for completely reviving her career. Some people close to the couple say he’s actually an abusive jerk who has made her life a nightmare.

So elegantly said and since there doesn’t appear to be any lawsuits, at least not yet, we’ll assume the claims may have some merit.