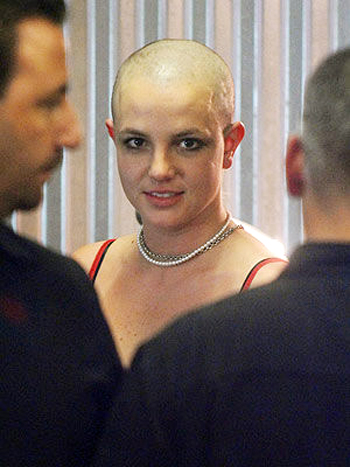 More alarming Britney news! Britney Spears is on “medical hold” at Cedars – Sinai Medical Center. Things finally came to a head when Britney refused to give her children to Kevin Federline’s bodyguards when they came to her house to pick the kids up as part of a court order. She reportedly locked herself in one of the rooms with Jayden James. The fire brigade and the police had to be called to mediate and after a reported three – hour standoff. Paramedics were called in when it was determined that Britney was under the influence of an unknown substance.

Jayden James was safely retrieved from Britney and it was reported that she was brought out of the house and into an ambulance in a stretcher and looking absolutely out of it.

She is now undergoing psychological and physical tests and there are reports that she is also on suicide watch.

Never was a fan of Britney, but I really am worried for her right now. Here’s hoping that 2008 will be a better year for the erstwhile pop princess.