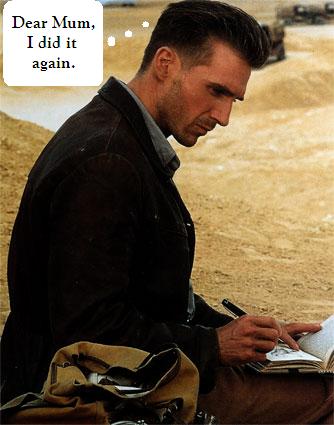 I was rambling around for someÂ hot Ralph FiennesÂ photographs for the Hottest Man of the Day post, when I stumbled upon this little gem.Â  I just couldn’t resist,Â no oneÂ could make up howÂ hilariousÂ this nugget is.

Apparently English Patient actor Ralph FiennesÂ joined theÂ mile-highÂ club just this past weekend while flying, get this, from Australia to India as a Unicef ambassador for to promote HIVÂ awareness as well as practicing safe sex.Â  Well, it looks like he had a lesson himself before he landed, eh?

According to the Australian Sunday Telegraph, 44-year-old Fiennes & 38-year-old flight attendant Lisa Robertson took a little bit more time in the bathroom that usual, and in the same one for that matter.

Two other Qantas employees saw Fiennes & Robertson as they entered the facility, and also waited for them to come out, for some odd reason.Â  After they were sure of what they were seeing, the cohorts reported the sexual activity to a senior crew member.

In a recent statement, Roberston denies the sexy allegations, saying, “While conversing with Mr. Fiennes during my break, I expressed a need to go to the toilet.”

“I explained to him that this was inappropriate and asked him to leave.Â  Mr. Fiennes became amorous towards me and, after a short period of time, I convinced him to leave the toilet, which he did.”

Why on earth would you do that?Â  It’s freeking hottiepants Ralph Fiennes!Â  Robertson has reportedly been hiding since the steamy incident, after she was grounded without pay.Â

I dunno, guys.Â  Do you believe ole Lisa’s statement?Â  I’m pretty sure she had a piece of the Fiennes & she liked it!