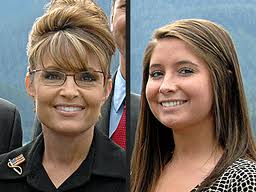 Listen up kids, if you want to become famous in America all you need to do is have a child as a teenager out of wedlock and have a famous politician parent, at least that’s the message ABC is sending by casting Bristol Palin, daughter of Sarah Palin for the 11th season of their hit show Dancing With The Stars.

Palin is not a dancer, however she told PopEater that she’s looking forward to living in L.A. for a while, a move that will of course include her son Tripp. Sarah Palin is also expected to make the trip and sit in the front row to cheer her daughter on.

According to a source close to Palin:

“Bristol is excited and scared and hopes she gets Maksim Chmerkovskiy as her partner.” However with Chmerkovskiy alleged to be dancing with Kirstie Alley her wish probably won’t be coming true unless the Alley partnership turns out to be incorrect.

So last season Kate Gosselin danced on the show, then she filmed an episode of Kate Plus 8 with Sarah Palin as she taught Kate to camp and now Bristol Palin has landed a TV spot, it all feels a bit forced.

What do you think about the talentless Bristol joining the cast of DWTS.