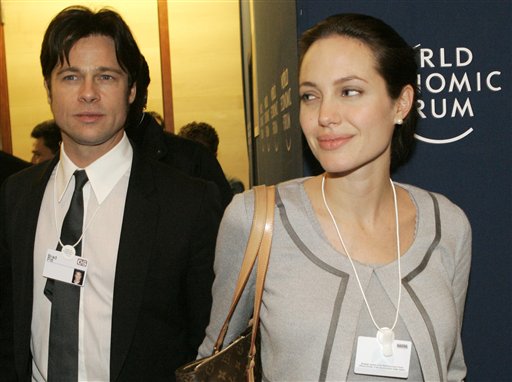 Brad Pitt, Angelina Jolie & kids arrived by a private jet in Namibia last Tuesday giving the gossip-sphere fodder & wondering if Angelina will give birth in Africa. An MSN Entertainment insider, however, states “The point of the trip is to spend some quality time together before the birth. The kids are with them, but there’s a nanny to occupy them when Brad and Ange want to concentrate on each other.”

Pitt & Jolie are staying at a secluded Namibian beach resort surrounded by tight security. The famous couple have rented out the entire Swakopmund Hotel & Entertainment Centre, which conveniently enough just happens to have an on-site doctor and small hospital on the property. It would make sense for Jolie to give birth in Africa, an insider shared with the Daily Mirror, “Angelina is passionate about Africa and thinks the idea of her and Brad’s child having an African passport is really cool.” It might be a stretch for Brad, though, who has been very protective of the pregnant Jolie and wishes her to be in a more well-equipped hospital.

What interests me is, who will get the first photo of Bradelina’s baby. People magazine reportedly dropped half a million dollars into Wyclef Jean’s Yele Haiti charity in exchange for photographing a very pregnant Jolie. You know that is a great system, you know that paparazzi are going to steak you out in order to get the prized pic, why not offer the photos yourselves in exchange for a donation to a charity you feel passionate about? I like it, good job to Jolie & Pitt. I take my hat off in your general direction.

Brad Pitt’s publicist commented on offers for photographs of the baby saying, “We’re getting offers.” Estimates on what the coveted image cold bring in range from at least $1 million to a wide-mouthed $5 million. Hmmm. What about the ‘Bloggers-R-Us’ charity. Think they’d go for it?

One unnamed editor said, “We’ll promote your charity, we’ll throw an auction for your charity. We’ll do articles on it in our magazine, we’ll have our staff go volunteer in Africa or Haiti or wherever.” That’s pretty cutely desperate. I wouldn’t mind a trip to Africa, send me!

But another undisclosed editor stated, “People’s going to get the picture and there’s nothing we can do about it.” Poor kid. All’s well that ends well. A charity will receive at least $1 million extra dollars and we will all soon see the Jolie-Pitt baby.