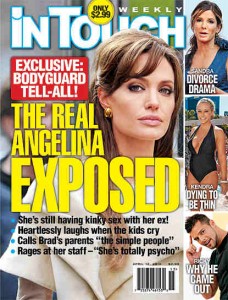 …if you believe their former body guard. Read this statement from In Touch:

In an exclusive interview with In Touch, Angelina Jolie and Brad Pitt’s former bodyguard describes what he claims to be a woman whose erratic behavior, yelling fits, and unreasonable demands deeply hurt not only staff members—but especially Brad and their six children.

“Angelina has a public and a private persona,” claims the former bodyguard, who for security reasons chooses only to be identified by his first name, Bill. “In my opinion, the real Angelina is self-centered and a control freak. She has no patience at all. She doesn’t do things out of the kindness of her heart. And she’s totally psycho.”

While Brad is laid-back and patient with his kids’ often wild behavior, Angelina is anything but. “She screams and yells a lot, then walks away,” Bill says, explaining that Angelina would often “disappear into her suite for hours,” leaving staffers—and Brad—to deal with her children. “She would punish them with silence,” says Bill, adding, “I think she could be abusive at times in a mental way.” If the children were to get upset by her withholding behavior, he says, Angelina didn’t seem to care. “She is not moved by tears,” he explains. Still more disturbing, he recalls, Angelina has a “quirky habit” of “giggling when one of her kids would start crying.”

The bodyguard, who was working for Brad and Angelina at the start of their relationship, remembers “a lot of laughing and fun” and “spontaneous sex” back then. Now, though, the couple often sleeps in separate bedrooms, and that honeymoon phase seems to be ancient history. Even when they aren’t actively arguing, Bill says, Angelina “nitpicks” Brad—criticizing him constantly. “She says things like, ‘Are you going to wear that shirt again today?’ and tells him he’s like another one of the kids.”

According to Bill, Brad has come to dread Angelina’s phone calls. “She’ll call him from the set to interrogate him,” Bill explains. “His face goes white, and he just stares at his feet.” When Angelina’s yelling gets to be too much, Brad will “put her on speaker and walk away from the phone,” Bill reveals. “Angelina will hang up and continue calling until one of the staff picks up.”

Check out the magazine’s latest issue for the full story.

Do you believe the bodyguard’s tell-all interview?