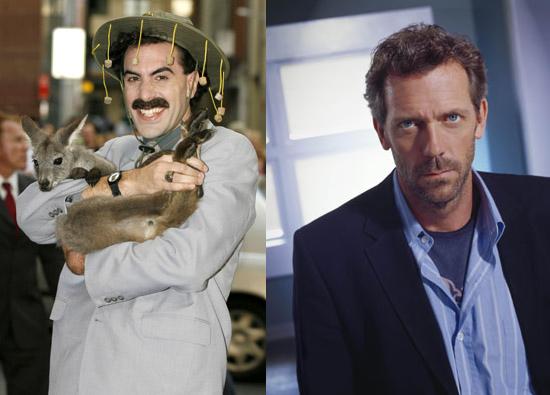 Sacha Baron Cohen, the man you know as Borat– yes he is actually an actor & not a real person, was going out for a drink with House actor Hugh Laurie on Saturday after the two appeared on Saturday Night Live.Â

Quite unexpectedly, Cohen got into his well-rehearsed Borat character and walked up to an unsuspected man on the New York City streets.Â  When the unknown & temperamental gentleman did not find Borat funny in the least, he hit Borat square in the face repeatedly.Â  But then Dr. House or actor Hugh Laurie came to Cohen’s rescue & pushed the upset man away.

“BORAT star Sacha Baron Cohen was beaten up by a passer-by after he tried to play a prank as his alter ego.

He approached the man and said: â€œI like your clothings. Are nice! Please may I buying? I want have sex with it.â€

But the bystander didnâ€™t see the joke. He took one look at Cohen and punched him in the face.

The funnyman â€” known for his Borat catchphrase â€œJagshemash!â€ â€” yelled for help but was slugged again and again.

He was rescued by actor pal Hugh Laurie who had been on his way to a New York bar with Cohen.

Laurie rushed to help and pushed the man away as Cohen struggled to his feet. A pal of Cohen said: â€œSacha couldnâ€™t resist playing the fool as Borat, but picked on the wrong person.

â€œI guess this guy thought he was being attacked by someone unstable and lashed out. Sacha is very lucky he didnâ€™t get a much worse beating.â€

The incident took place after Laurie and Cohen appeared on the US TV show Saturday Night Live. The Brit comics were on their way to a late dinner when Laurie suggested they visit a bar in Manhattan.

Laurie, 47, told friends he feared Cohen was going to get badly beaten up. Luckily, 35-year-old Cohen did not receive any lasting scars.”

Well, that’s one way to take your act to the people.Â  Too bad that it didn’t work out too well for him.Â  Poor Borat, beaten up, being sued by frat boys & being banned in Russia.Â  It’s just not his week, is it?Â  Well, it does kinda sound like mine….