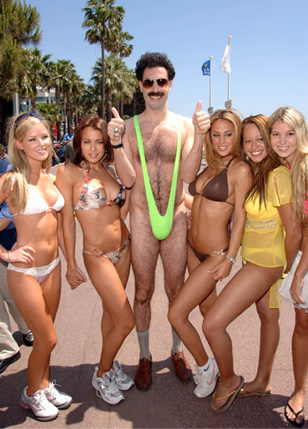 It looks like Borat’s luck may be running out as twoÂ fraternity brothers are filing a lawsuit against the comedianÂ over their drunkenÂ spotÂ in the new hit movie.Â  So, don’t they make you sign some kind of release form to avoid situations like this?Â

On Thursday legal action was taken against Borat &Â his spoof documentary Borat:Â  Cultural Learnings of America for Make Benefit Glorious Nation of Kazakhstan.Â  The lawsuit states that the two college kids “engaged in behavior that they otherwise would not have engaged in.”Â

The plaintiffs that filed the suit have not been namedÂ “to protect themselves from any additional and unnecessary embarrassment.”

The two were identified in the movie as frat brothers from a South Carolina university where they were shown making insulting comments about women & minorities.Â  Ouch!Â  Yeah, I guess they pulled a Mel Gibson move & regretted their actions the next morning, or while South Carolina minorities & women were beating the crap out of them after seeing the movie.Â  Maybe I’m a little rash, but the peckers deserve what they get.Â  What do you think?