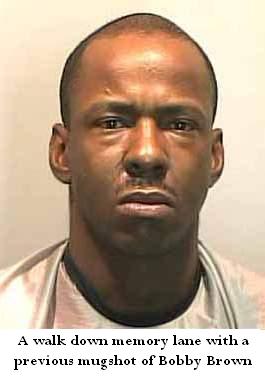 In Massachusetts Monday a family judge ordered 37-year-old Bobby Brown arrested after he failed to show up at a hearing regarding delinquent child support payments.

“Whether or not he’s going through a divorce doesn’t negate the fact that he still owes child support relative to his two children that he had prior to his marriage,”Â responded Family Court Judge Paula Carey.

According to Kim Ward, the mother of the two children, says Brown owes two months of child support totaling, $11,000.Â  Wow,Â those kids must have a lot ofÂ Xbox games for that kind of money.

Brown’s attorney did not say where Bobby isÂ currently residing, although all Celebrific readers know this.Â  I think they ought to check the home ofÂ Superhead Karrine Steffans if they want to find the Bobster.Â

Poor Bobby Brown, he had such a lucrative career in the 80s, a cocaine-ridden marriage to Whitney & now the poor lad is penniless without the Houston to get his back.Â  Well, hopefully Superhead can give him a leg up, and maybe a little more too.