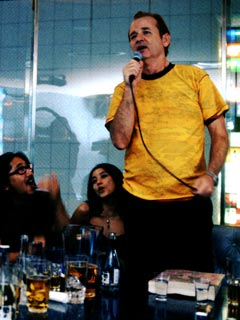 Well, it looks like you canÂ man out of partying, but you can’t take the partying out of the man.Â  Bill Murray created a little sensation in the Scottish town on St. Andrews after joining Scandinavian students at an all-night party & even staying to helpÂ with theÂ dishes.Â Â Kinda sounds like Lost in Translation for real?Â

This weekend 56-year-young Murray joined up with 22-year-old Norwegian student Lykke Stavnef who showed off his new pal at party where many Scandinavian students were already in full-swing.

“Nobody could believe it when I arrived at the party with Bill Murray,” Stavnef stated.

“He was just like the character in ‘Lost in Translation.'”Â  So Bill doesn’t have a personality of his own?

Stavnef went on to say that Mr. Murray was completely content with drinking his vodka out of a coffee cup, and even offered to help with the dishes.

News quickly spread around the small city that Ghostbusters’ Bill Murray was in town, and many a people came by to say hello.

“He was joking with me about reheating some leftover pasta and how drunk everyone was,” said 22-year-old partygoer Agnes Huitfeldt.

“The party was overflowing with stunning Scandinavian blondes. He seemed to be in his element, cracking lots of jokes. It was the talk of the town the next day,” stated 22-year-old college student Tom Wright.

Hilariously, just after doing the dishes, just like that, Bill Murray was gone.Â  And was he truly ever there?