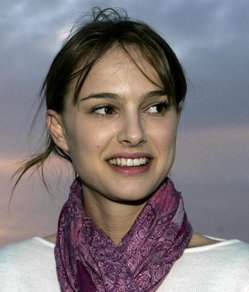 Natalie Portman has fulfilled a long-standing goal.Â  No, not making Jack Osborne invisible- the Harvard graduate has shaved her pretty little head for her role in the Wachowski brothers’ new film, V for Vendetta.Â

“I was really excited to get to shave my head- it’s something I’d wanted to do for a while and now I had a good excuse,” Portman told reporters at the Berlin International Film Festival.Â  “It was nice to shed that level of vanity for a girl.”Â  That’s beautiful.

The new film by Andy & Larry Wachowski is set in a future Britain run by a fascist dictatorship.Â  Is this where America enters and saves the day with chaos and bombs I wonder?Â  Portman’s character, Evey, is saved from an attack by a masked anarchist only known as “V” played by Hugo WeavingÂ (the Matrix Agent Smith).Â  Evey joins in his crusade against the regime.Â  The movie is set to hit screens March 17th.

The Closer actress is enjoying her new look except for one flaw, “I wasn’t used to being looked at so much.Â  Walking down the street, I can usually blend in, and people really stare at you when you’re a girl with a shaved head.”

Some interesting tid bits regarding Natalie:Â