.
You are here: Home / Celebrities / Ashton Kutcher Gets Cozy With A Koala 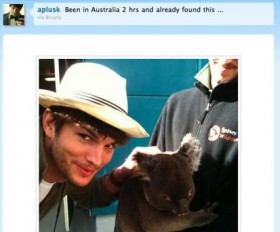 Kutcher also visited with some crocodiles, kangaroos and other tourist friendly exhibits. He also spent 20 minutes taking pictures of sharks at the Sydney Aquarium.

After his trip to the Zoo and Aquarium Kutcher was then spotted at the Bondi Icebergs restaurant for lunch, a location which overlooks the world-renowned Bondi Beach.

Kutcher is visiting Australia to promote his newest movie Killers.