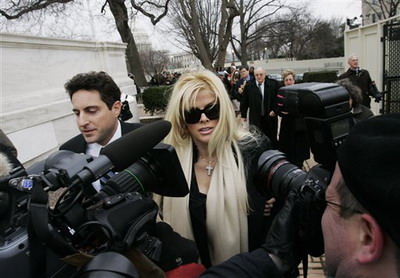 As you’ve noticed, we just found out that Playboy playmate Anna Nicole Smith has died. Smith was staying at the Seminole Hard Rock Hotel & Casino where she was found collapsed in her sixth-floor hotel room.

A private nurse telephoned 911 & Anna Nicole’s bodyguard administered CPR, but Smith was proclaimed dead at the hospital she was rushed to.

Which leaves us wondering what happened to Anna Nicole? Was she really sick with the flu? Did she collapse after losing that 69 pounds so quickly? Where was her somewhat husband Howard K Stern when all this happened? Was it suicide?

Was Anna Nicole Smith so grieved over her son Daniel’s death that she took her own life? We can only wait to find out as the autopsy will not be performed until Friday & we probably won’t know the results of the autopsy for days, maybe even next week.

A world without Anna Nicole Smith? I don’t know if I can live in that kind of a world.

You tell me- Did Anna Nicole Smith commit suicide?