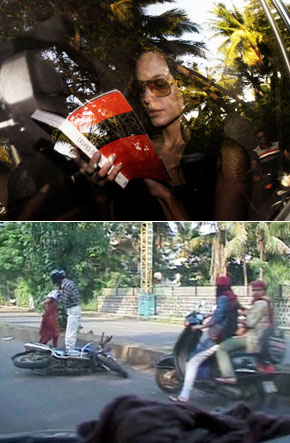 A vehicle carrying Angelina Jolie peeled from a traffic signal to avoid paparazzi when the driver hit a man on a motorcycle.

Police have confirmed that 19-year-old Mittal Rawat was struck by the car carrying A Mighty Heart star Angelina Jolie.Â  The bruised teen seemed unhurt and was able to walk away from the accident.Â  Interestingly Jolie was reading Crimes of War: What the Public Should Know when the incident occurred.Â

This is the second documented incident regarding the paparazzi this week, on Ocotber 7Â Jolie & Brad Pitt’s infamous bodyguard Mickey Brett grabbed the neck of British photographer Sam Relph as the famous couple were leaving their Le Meridien Pune hotel.

According to Relph, â€œHe said if I took pictures, he would kill me.”

â€œHe had his fingers on my windpipe and he knew what he was doing. I couldnâ€™t breathe.â€

Wow, what a champ that Mickey is,Â a trueÂ soldierÂ of peace.

Jolie &Â Pitt, if youÂ haven’t heard, are filming aÂ movie aboutÂ the late reporter Daniel Pearl who was killed by terrorists in Pakistan in 2002.Â  They areÂ currently filming in Pune, India and it looks like their making themselves right at home.