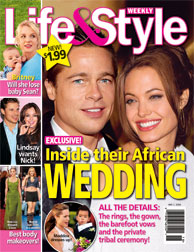 According to Life & Style the Angelina Jolie & Brad Pitt Namibian wedding rumors are true.Â  Brad has finally gotten his wish, Angelina will marry the poor boy.Â  This will be the third marriage for Jolie (third time’s the charm?) and the second for Brad Pitt, but who’s counting when it comes to this hot & heavy couple?

The wedding is not expected to be a typical one.Â  Well, how could it be when Jolie showed up for her first marriage to Hackers co-actor Johnny Lee Miller in black leather pants and a white shirt painted with his name in her blood on the back?Â

Rumors are that Jolie & Pitt will have a traditional Namibian ceremony which is usually performed by a local tribal chief in the Bantu dialect.Â  With reports of the pairs’ families flying in, I wouldn’t be surprised to learn that Brad Pitt turned into Brad Jolie over the weekend.