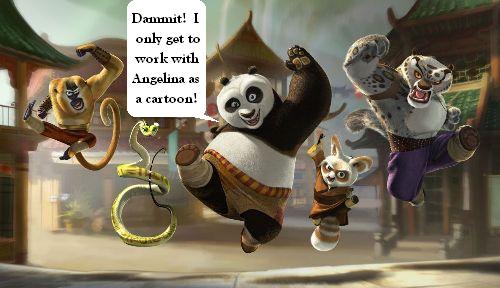 New momÂ Angelina Jolie is throwing back the curtains of maternity leave & taking on her first role since the birth of her daughter Shiloh Nouvel Jolie-Pitt in May.

Jolie will also join cast members Dustin Hoffman, Jackie Chan, Lucy Liu & Ian McShane for the martial arts cartoon movie scheduled to be released in May 2008, hope you’re strapped in for a wait.Â

Black will, of course, play Po the Panda who slings noodles in a restaurant & loves kung fu, but alas, does not have the right body to practice the marial art.

Jolie will provide the voice of Tigress, a martial arts master who must get the Po the Panda into fighting form after it is revealed that he is the Chosen One.

Don’t you just love movie news for movies that will come out in 2008?Â  Anticipation is overrated, possibly the same principle goes for this movie.