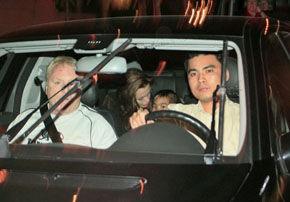 Actress Angelina JolieÂ & partner in crime Brad Pitt have completed the adoption process for their new Vietnamese son.Â  The three-year-old boy, who has an interesting life ahead of him, wasÂ picked up Thursday at 9am local time.

Apparently Jolie is not only taking the adopted boy away from the culture he has known for three years, she is also renaming the child.Â  The boy’s birth name is Pham Quang Sang & Jolie will be renaming him to Pax Thien Jolie.Â  I wonder how he feels about that one…Â  Interestingly, the adopted boy’s name means “light” in VietnameseÂ & Thien means “heaven”.Â  So, it looks like Jolie is taking the boy away from the light & into heaven.

Vietnamese press reporters are saying that Pax cried during the adoption ceremony, as well as hid.Â  Jolie reportedly comforted him, who was accompanied by her other adopted son Maddox.

Angelina & children finished up the ceremony around 10am & returned to their hotel.Â  Wonder where ole Brad is?

Ang must now meet with United States officials who will review the adoption & issue a passport for the child.Â  If everything goes well, Jolie will be able to bring home the new addition to their family by this weekend.

Congrats all around, I think.