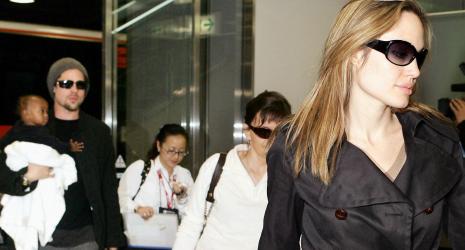 While we’re still waiting on pins & needles for the birth of baby Jolie-Pitt, here are some quick Namibia news updates.Â  Charges against a South African photographer who was arrested for trespassing while trying toÂ snap a photo ofÂ pregnant AngelinaÂ Jolie & partner BradÂ Pitt have been dismissed.Â Â  AÂ Namibian judge has dismissed the trespassing charges against 48-year-old John Liebenberg who was taken into custody Friday afternoon.

Liebenberg drove into the back of a police station in Walvis Bay, Namibia in search of a vantage pointÂ of a nearby hospital.Â The veteran photojournalist was reacting to a tip that the elusive Jolie had been rushed to there to have her baby.

Liebenberg was released on a warning after being detained for three days.

In other Angelina Jolie / Brad Pitt news, their adopted daughter Zahara has been struck down with a mysterious illness.Â  The 16-month-old girl has reportedly stopped sleeping properly & cries when she is placed on her back.

According to The Sun, Brad is insisting on taking Zahara to the US for treatment, but the about-to-burst pregnant Angelina wants to stay in Africa until she delivers her baby.

A source states, “Brad is absolutely beside himself. He’s desperate to take Zahara to the US for medical attention. But Angie insists on staying in Africa.

“It has caused a number of fights between them.”

It is thought that Zahara might have a genetic illness, but innumerable tests have yet to reveal any clues.

The source added: “She’s had so many tests, but no one knows what is wrong.”