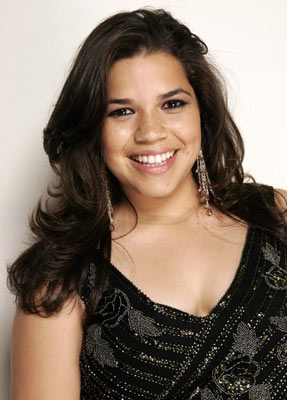 America Ferrara has announced that she and her long time boyfriend Ryan Piers Williams are engaged.

Her rep let the news be known to PEOPLE and on Wednesday she was spotted wearing a brand new shiny diamond ring while attending the Edinburgh Film Festival for a screening of The Illusionist in Scotland.

Ferrara and Williams met when Ferrara was cast in a student film Williams was directing at the University of Southern California.

“Currently live together and have two dogs, a Golden Retriever and a Great Dane.”

Unfamiliar with the works of Williams? He’s directed one full length movie called ‘Muertas’ and two short films ‘The Flood’ and ‘Confine.”  He’s also the owner of the production company, Down by the River Productions.

It’s been a long courting period and we wish them nothing but the best. After her series was cancelled it’s nice to see that “Ugly Betty” is finally set to marry her Prince Charming.