If you were a fan of In Living Color then you know about Jim Carrey’s character Vera de Milo who was a steroid chewing female bodybuilder. Now the Lohan family is messed up enough as it is so I hate to bring more down upon them, but once you see the photo below you will understand why I had to point out these similarities. It really is scary because this is an exact match.

Now another question that needs to be raised is why she looks so upset about things because she is famous for having a drugged up Disney star sister so you would think she is in coasterville. She doesn’t have to do anything, but she just doesn’t get it. She is probably spoiled and wished that Lindsay would go back to being a red head that didn’t sleep with everyone with a penis, that includes Samantha Ronson.

A final question is why would she wear a swimsuit that looks as though it was made for a 5-year old? I mean it’s not even covering her nipples, at least I think it isn’t. I’m too distracted by how horrific the thing is on her that I am in complete shock at the thought that someone would look in the mirror and think that the outfit is okay.

Was her sister not around to guide her? Hell, what am I saying, her sister was probably the one that encouraged her to wear it. Lindsay is sneaky like that. 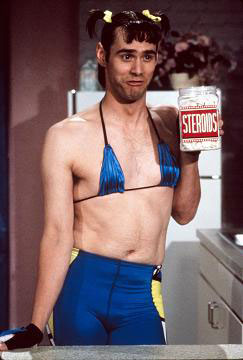