.
You are here: Home / TV / Alex Meets Auto-Tune. The Weirdest Jeopardy Category Ever! 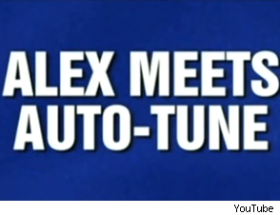 Jeopardy has had it’s fair share of weird and wacky categories that get thrown in to liven up the show, but none of them have been as weird as the newest category known as “Alex Meets Auto-Tune.”

The new category uses a synthesized version of Trebek’s voice played over weird synth beats that closely match their original songs. The idea? Alex “sing/talks” musical pieces with the wrong words and players must guess the right song by name after listening to the beat.

It’s weird, a little bit annoying and totally one of the funniest moments on Jeopardy, but not in that haha type of way, more in that “did I just see and hear that happen” type of mindset.

Here’s the video of the category in action:

What do you think? Anyone want to pass me some of the LSD the writers of this segment were on when they thought it up?