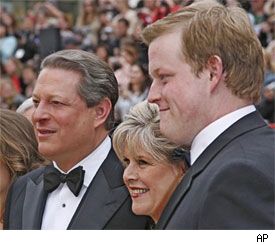 Damn, it’s probably a good thing that Al Gore seems to be sitting out this Presidential election, what with hisÂ son being a fat druggie & all.

24-year-old Al GoreÂ III was arrested on suspicion of drugs possession Wednesday, looks like he was going to have a fun fourth until the coppers found him driving his Prius over 100 miles an hour in Orange County.Â  Did anyone else think that a Prius couldn’t even dream of maintaining that kind of speed?

Anyhoo, when the cops searched his car they found some good old-fashioned weed along with Valium, Xanax, VicodinÂ & Adderall.Â  Damn, that’s a lot of drugs for one little Gore.

This isn’t Gore III first brush with the law, he was charged with marijuana possession in 2003 & was ticketed for a spot of reckless driving back in 2000 & 2002.

This probably isn’t going to go down well for the young man…. Maybe he can share a cell with pregs Nicole Richie.