.
You are here: Home / Breakups & Goodbyes / 98 Degrees of Separation 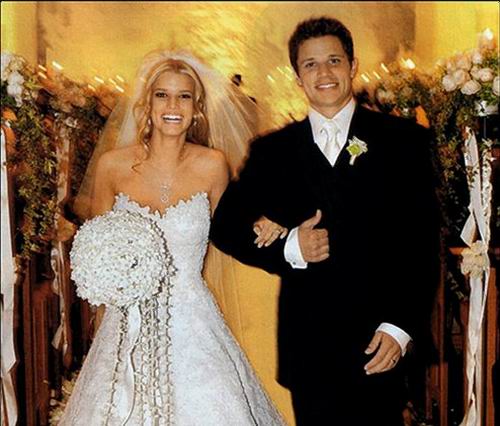 Our once favorite sweethearts are going through the messy details of divorce.Â  Nick Lachey and Jessica Simpson who won fame and arousal from the MTV reality show, “Newlyweds: Nick & Jessica” are hashing it out and Nick wants to keep the family jewels.Â

Lachey citedÂ irreconcilable differences for the dissolution of their three-year marriage and asked for “miscellaneous jewelry and other personal effects” in court last Friday.Â  Lachey states that he and Simpson parted ways December 13, although the Dukes of Hazard beauty claims it was November 23.Â  Why does this matter you ask?

Well, I have to think it’s because Simpson earned more than $30 million last year and you gotta get whatcha can.Â  When the couple married in October 2002, 98 Degrees memberÂ Lachey had more earning power than his wife but did not opt for a Massey prenup.Â  Perhaps that was the best idea after all.Â

At least they can each run to the arms of their new loves when the divorce proceedings are just too much.Â  Jessica is still getting hot & bothered by Maroon 5 frontman Adam Levine and it looks like Nick has his arms wrapped a