.
You are here: Home / Career Moves / 5 Actresses Who Are Set To Become Fairy Tale Heroines

Movie adaptations of fairy tales are nothing new, but what keeps ’em interesting are the actresses who are next in line to spin around in dresses! Let’s check out the confirmed ones, shall we? 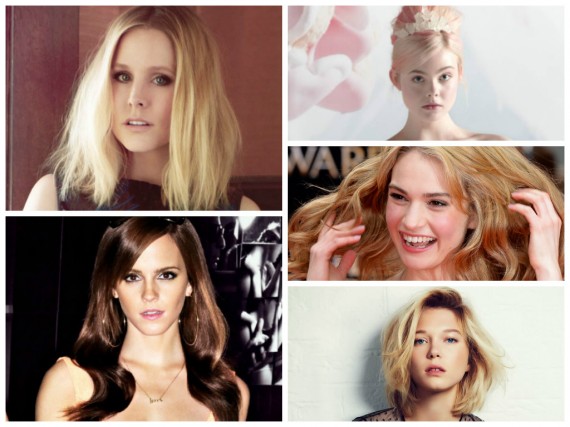 So, the Veronica Mars actress isn’t exactly donning any costume, but we’re curious how she helps shape another Disney princess in the form of Anna, from the upcoming animated feature, Frozen, this November.

Dakota’s lil sis is about to have her share of the cake too, as she plays the role of Aurora alongside Angelina Jolie in next summer’s Maleficent, the retelling of “Sleeping Beauty” from the perspective of the evil sorceress.

After exploding onto the international arena with her critically-acclaimed film, Blue Is The Warmest Color, the French actress is starring with Vincent Cassel on the (well, French) live-action version of “Beauty and the Beast”, La belle et la bête, next year.

The Harry Potter babe will also be faring on another “Beauty and the Beast”-inspired project. With Guillermo del Toro helming, we’re sure that Emma’s nuanced performance will go hand-in-hand with a decidedly darker narration of this beloved story.

2015 better watch out for Lily James. The Downton Abbey regular is about to invade US soil as she stars in Disney’s live-action remake of Cinderella, with no less than Cate Blanchett as the evil stepmom.