As human beings we aspire, or at least try, to be the perfect version of ourselves. We exercise, eat well, dress well and sleep well so that we can look good. Celebrities who have lived their entire lives under the public microscope can tell that it is never easy. Most of their audiences level harsh criticisms about their appearance despite putting them on a pedestal and falling short of worshipping the ground they walk on.

Over the years, most of us have heard of how so and so had a procedure done on their person and how it made her look fabulous.

Nowadays, the trend has somewhat impacted young and old celebrities who would like to ensure their glamour never wanes and they as gorgeous as ever.

There are two kinds of cosmetic procedures; good ones that leave most people stunned with jaws on the floor. And then there are the bad ones. Botched operations that leave people with more questions than answers about whether you went to a quack or went to a dingy hospital to have the procedure done. That is why it is recommended that if you are considering going under the knife you should go to a respectable doctor who knows exactly what they are doing so you can have peace of mind.

Here are 3 celebrities that have had some help from plastic surgeons like Los Angeles’ Dr. Bandy and Scottsdale’s plastic surgery expert Dr. Berardi.

This pop sensation has been off the grid for a while probably with the demands of family.

Her recent pictures have sent tongues wagging. Why? Her bum is unbelievably round. Most of the people out there have speculated that she probably has had a bum lift because she is way too tiny to have that round rump. However, she has never commented on whether the speculation about her posterior.

Over the years, Christina has been the subject of cosmetic surgery discussion where it had been reported in the media that she had breast implant, liposuction, lip augmentation and rhinoplasty (nose job).

We have to wait to hear if and when she will spill the beans on the subject.

After starring alongside Tom Cruise in Jerry McGuire and playing the titular character in the Bridget Jones Diary, Renee Zellweger has sent her fans guessing with a new transformation. Her new look has confused many as she made her way on the red carpet during the ELLE Hollywood Women’s awards. For the most part, she almost looked unrecognisable fuelling further speculation that she had some work done on her. 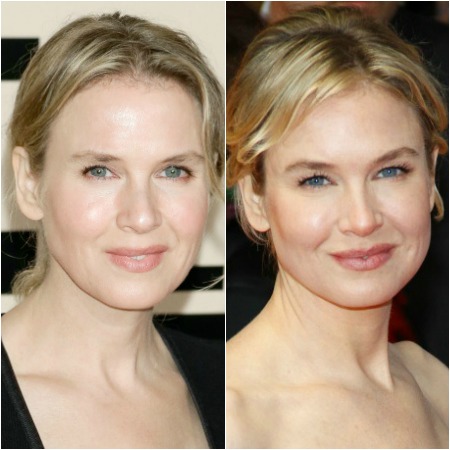 The 45-year-old Cinderella Man star appeared to have a flawless forehead and the glabella (area between the eyebrows) looked a bit shorter than before.

She has not officially come out to discuss her new look but one thing is for sure, she is looking awesome for a 45 year old.

After a tumultuous years following her arrest, this singer and former X factor judge has finally opened up about having her lips done.

Tulisa has over the years been a subject of discussion with mounting speculation that she had had plastic surgery a fact she denied in a live interview on the Jonathan Ross Show on ITV on 13th December 2014.

She said that having her lips done made her happy.