.
You are here: Home / Celebrities / Demi Moore / 12 Stars Who Love Their Dentists 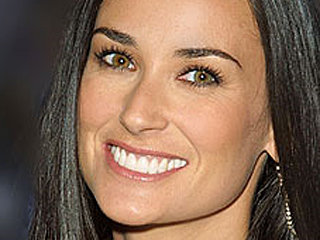 It’s a well known fact that to cut it in Hollywood you need a megawatt smile. But as celebrities often play their cards close to their chest when it comes to cosmetic procedures, it requires some super sleuthing and a couple of ‘before’ photos to work out whether in fact mother nature blessed them with great genes, or if they have had a helping hand in pursuit of the perfect pearly whites.

Demi Moore
As well as undergoing a rumoured $ 365,000 worth of plastic surgery over the years, Demi has completed the Hollywood package with a smile makeover. Her teeth have possibly been capped, a process which involves filing the teeth down and using dental cement to fit individual false teeth, usually made from porcelain, in their place. This has resulted in an even, bright white smile, a far cry from her General Hospital days.

Hilary Duff
Disney alumni Hilary famously had badly proportioned porcelain veneers fitted in 2005 resulting in a smile that was much parodied and likened to that of a horse. In 2008, her dental misdemeanours were corrected as her veneers, which are porcelain or ceramic coverings fixed to the front of the teeth, were reshaped and re-contoured. Hilary’s teeth are now a shining example of the perfect star smile.

Kirsten Dunst
Although once claiming to ‘love’ the uniqueness of her famous fangs, in more recent photos it appears that Kirsten has traded them for the textbook Hollywood grin. So are Kirsten’s new straight white teeth down to some clever airbrushing, or has she conformed to Tinseltown pressure and booked in with an orthodontist?

And it’s not just the girls who are in on the act; take a look at some of Hollywood’s leading men who have invested in their smiles:

Tom Cruise
Famously, in 2002, the Top Gun star wore fixed ceramic braces to realign his bite. No longer just the domain of kids and teens, Tom’s braces have led to an increase in the number of adults, particularly men, undergoing treatment to fix their own imperfections and achieve the perfect smile.

Zac Efron
When High School Musical heart-throb Zac Efron traded his gappy front teeth to a full white smile, it marked his ambition to be taken more seriously and move from Disney territory to more grown up movies. So how did he achieve his new smile? It is possible that the gap in Zac’s front teeth closed naturally over time, or, that he had a helping hand in the form of veneers or Invisalign braces. Invisalign are clear, removable aligners, often used as an alternative to traditional fixed braces.

Ben Affleck too has undergone a smile overhaul, Michael Douglas had his teeth revamped back in the 80s and even Nicolas Cage appears to have undergone whitening procedures to add a little extra star quality to his smile.

So, watch out when you next see a big Hollywood star as they just have a different smile altogether!